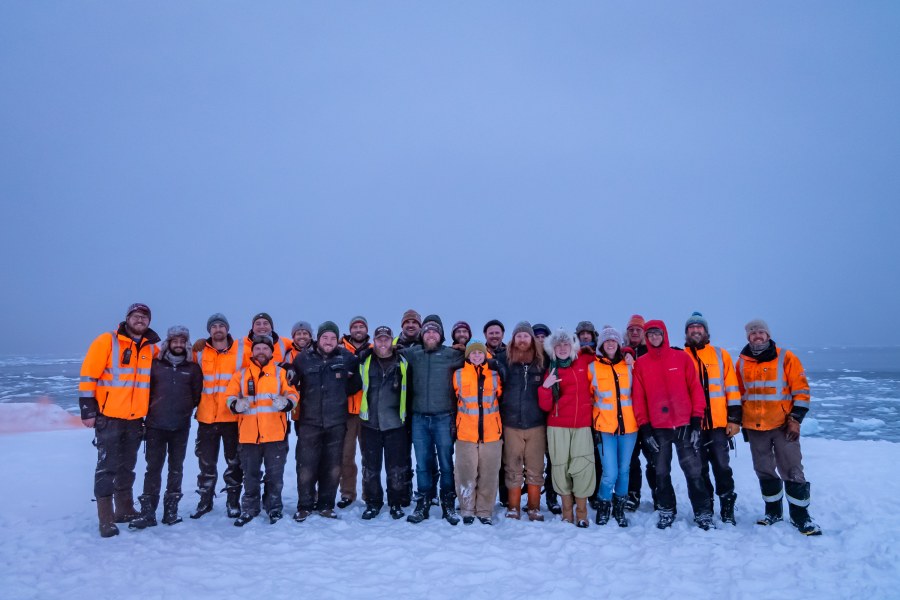 This story shall the good man teach his son;
And Winter shall ne’er go by,
From this day to the ending of the world,
But we in it shall be remember’d;
We few, we happy few, we band of brothers;
For he to-day that sheds his blood with me
Shall be my brother; be he ne’er so vile,
This day shall gentle his condition:
And gentlemen in England now a-bed
Shall think themselves accursed they were not here
And hold their manhoods cheap whiles any speaks
That fought with us upon mid winter’s day

During the past weeks and months, as the days started to shorten and the nights grew longer, as the clouds started to pile up, darkening the horizon – chased across the sky by the unforgiving blizzardous winds, as the cold started to creep in, slowly freezing the sea and leaving powdery snow piled underneath our windows and blanketing the mountain tops, the station became quieter.  – First the planes went, taking with them the majority of people stationed down here during summer. And then – finally at the 17th of May well into the Antarctic autumn – the ship came to take the rest of the summer crowd to the other side of the world.

We have been waiting for this day since we first set foot on Rothera. We have been crossing the days in the calendar, praying for its fast arrival while simultaneously wanting the days of summer to last longer and not wanting what have become good friends to leave. As the embarkation time came closer, the whole wintering team started to assemble on the jetty, saying good byes, giving last hugs, shouting last jokes across the ship and then – the James Clark Ross left. We saw her off with flares and rockets and as she fainted on the horizon and the flares started to fizzle out the meaning of winter suddenly became very clear. We were truly alone in Antarctica. No more planes, no more ships, nobody but us for the next 5 months. Although this was a slightly sombre thought, we were also extremely excited that – finally – the station belonged to our little family. Winter was here!!

And although winter generally means the pace of life slows down a bit, we haven’t gotten around to that part yet. With the advent of winter comes a variety of duties, ceremonies and also whenever possible fun. The weather very much played ball, as soon as the ship left the temperature plummeted to a stable -16 and the wind eased off. Meaning we got to experience the extended twilight during beautifully clear, calm and cold perfect winter days. We took a few days off to recover from a very busy season. Most of this time was filled with adventure and skiing. A few of us spent a day climbing up a steep snowy gully at Leonie Island, just across the station. And although we had low cloud for most of the day and the view was limited, this actually emphasised the feeling of isolation which we had longed for so long. Climbing through powdery snow and along the occasional ice sheets our path guarded by rugged icy rocks distinctly resembled the gateway to Narnia. These first few days of holiday were a first test of how well we would work together as a team over the coming month. While everybody got to enjoy time off to do whatever they liked all of us chipped in a minimal amount of effort to keep the station ticking over and running smoothly and very importantly stay clean.

One big part of making the station our own – is the winter scrub out. Yes, this means cleaning absolutely everything and winterising buildings and rooms that we are not using, but it also means we can be a lot more comfortable. The canteen has turned into our living room, we have reclaimed the bar and this is where we mostly socialise and the best part of it is we are now travelling around the station by skidoo rather than gators.

Only a week after the ship left, we celebrated flag down. When the sun vanishes behind the horizon for the last time, the Union Jack at the highest point of the station is being pulled down by the oldest member on station. At Rothera this date does not necessarily coincide with the meteorological sun set as the mountains on the northern part of Adelaide Island are blocking the sun to us earlier than that. However this means we get long beautifully drawn out twilight during all light hours (not that many anymore), colouring the surrounding mountains in pink and gold and blue.

And as the daylight continues to shrink we are all preparing for midwinter when the sun in the Southern Hemisphere will be at its lowest point. Everywhere people are busy working on their midwinter gifts or preparing menus, movies and other surprises for this particular day. Obviously the returning winterers have the upper hand but everybody is very much looking forward to this special day in Antarctica and the countdown has already started.